By Office Staff on April 30, 2016 in Laser Skin Resurfacing 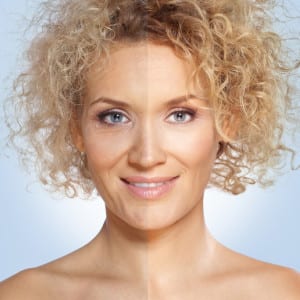 Unless you were in a cave around the holidays, chances are you saw or heard plenty about lasers in the new Star Wars movie. But there are other things you can do with lasers other than dispatch stormtroopers or power the Death Star’s weapons!

Dr. Ip uses lasers for laser skin resurfacing. Now, if you’re old enough you may remember a scene from Goldfinger where James Bond nearly got some serious laser resurfacing of his own. But this relatively new use of lasers is new.

How does laser resurfacing work?

Laser skin resurfacing is basically a laser peel. Dr. Ip usually uses a CO2 laser remove areas of damaged or wrinkled skin on the face, layer by layer. It is most commonly used to address fine lines, especially around the mouth and eyes, but is also effective on facial scars and uneven pigmentation.

In laser resurfacing, a beam of laser energy vaporizes the upper layers of damaged skin at very specific, controlled depths. By stripping away the outer layers of the skin, the body then builds new skin cells during the healing process. These new skin cells are smoother, tighter, and don’t feature the sun damage of the removed skin.

Laser resurfacing follows the same approach as dermabrasion or chemical peels, but it has some advantages.

You will have some mild swelling and discomfort after your laser resurfacing with Dr. Ip. This can be managed with ice packs and medication.

You will likely have a bandage applied after your procedure and it should be replaced after a day or two. After around one week, Dr. Ip will remove all bandages and apply a thin layer of ointment to the treated areas. Your skin will crust, but that will come off within 10 days. Redness will persist for several weeks. Obviously, you must avoid sun exposure and have nothing but 15 spf or greater sunscreen on whenever outdoors.

Interested in laser resurfacing with Dr. Ip? Call either his Newport Beach or Manhattan offices to make an appointment.

Three Types of Liposuction
Save Gotham – Get an Arm Lift